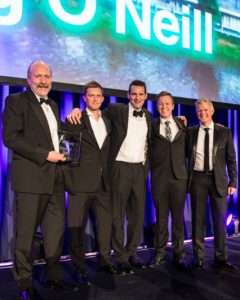 Canning O’Neill have been awarded North West Business Insider’s Office Agency Team Of The Year at the annual property awards, held at Manchester’s International Convention Centre in the city centre.

The team fought off stiff competition from 10 other nominees to win the prize, in front of almost 1,100 guests from the region’s property industry. Founded in 1997, by Directors Mark Canning and Conrad O’Neill, the six strong team has developed its reputation as a leading office agent with a solid presence having completed some of the region’s largest deals over the past five years.

Rugby legend Martin Bayfield was compère for an evening that rewarded the property community’s major achievements in a market that is “back with a bang”, said North West Business Insider editor Chris Maguire. “There’s a buzz in the North West property sector and that’s borne out by the quantity and quality of entries we’ve had this year,” he said.

Speaking about the win, Conrad O’Neill of Canning O’Neill said: “To have been chosen as the winner in such a highly competitive category is testament not only to the size of deals we have secured but also the complexity of those transactions. Our independent status, meaning that it is able to provide clients with impartial and trustworthy advice and we’re very proud to have been recognised for our work.”

One of Canning O’Neill’s clients, Antonia Martin-Wright of Commercial Estates Group said: “Canning O’Neill has quietly developed itself to be one of Manchester’s premier agents and we would happily recommend Conrad and the team for their unrivalled expertise. The team thoroughly deserves this award.”